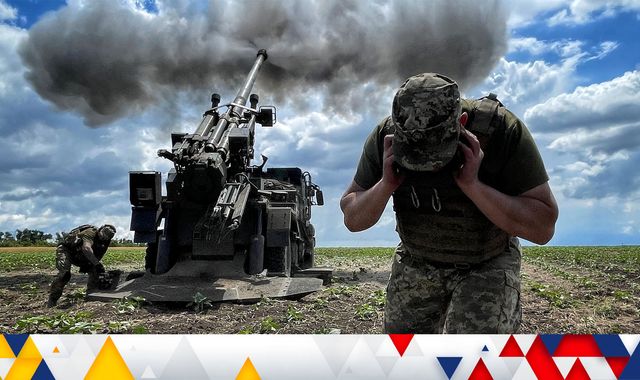 Russian troops are stepping up their efforts to ensure full control of the entire Donbass region in eastern Ukraine – and from what we’ve seen, there’s very little that’s going to stop them right now .

Much of the industrial heartland has already fallen to the Russian military, allowing President Vladimir Putin declare a significant victory after his troops seize the Luhansk region with the capture of the city of Lysychanskthe last Ukrainian stronghold there.

The Russians already control most of Donetsk, the second half of Donbass, and the signs are that they are moving to claim the rest.

Recent days have already seen an increase in attacks on the towns of Sloviansk and Bakhmut in the Donetsk region – and the frontline towns of Krasnohorivka and Marinka are also particularly vulnerable.

The areas have been fiercely contested for the past eight years and Putin launched his “special military operation” in February after unilaterally declaring Donetsk and Lugansk “independent”.

Luhansk Governor Serhiy Haidai said: “The loss of the Luhansk region is painful because it is the territory of Ukraine. For me personally, it’s special. This is the homeland where I was born and I am also the chief of the region.”

Ukrainian troops we spoke to repeatedly told us that they felt overwhelmed and overwhelmed by the superior number of Russian heavy artillery they were being bombarded with.

They hope that the arrival of foreign-supplied heavy artillery from America and Europe can help them reverse the trend, but it may have come too late for the Ukrainians to hold Donbass.

We are the first British journalists to be able to see the French-made Caesar howitzers which are now being used in an attempt to hold back the Russian army in the Donbass.

French President Emmanuel Macron has already provided 12 Caesars and after the G7 summit he pledged to provide six more. Heavy artillery is highly valued for its accuracy and can hit targets much further away – up to 30 miles away.

The Ukrainian troops of the 55th Brigade that we saw using the Caesars told us that the howitzers are much more versatile and give them mobility that helps protect the crew.

The cannon can be ready to fire in around 60 seconds, and in even less time (around 40 seconds) it can be on the move again to stay clear of enemy return fire.

The truck commander said his men spent 10 days learning to operate the armed truck in France. “What we need is more weapons like this,” he told us. “More people to help us train. All we need is more ammo and then we’ll do everything else on our own.”

They know they’re on the back foot right now, but there’s still a very high level of optimism about the long-term future here and he had that message for the Russians who are still busy celebrating their takeover. Luhansk. “It won’t be for long,” said the commander. “We’ll kick you out and get it all back.”

For these towns located right against the Russian Line of Control, where they have been fighting for eight years, the immediate future looks decidedly bleak.

We have seen boxes of aid being unloaded for the people of Krasnohorivka and aid workers have gone through a long list of around 6,000 people who they say are in desperate need of help.

One of them is Valentina who tells us that she saw her neighbor die the day before after a shell fell near her house. Residents feel caught in the middle of this land grab and attacked from both sides.

She said, “When you’re in the basements, fear takes over you. It’s fear and horror. Just horror.”

Her voice breaks and she sobs unashamedly at the misery of the situation here.

We see a hospital that has been bombed several times. It is barely functioning, has very few patients and even fewer medical staff, and the drugs are running out quickly.

Read more:
What will happen in the Donbass now that Lugansk has fallen to Russia?
Russians are ‘worn out’ in Lysychansk, intelligence expert says
Ukrainian civilians learn the hard way that mines will take years to clear

Police showed us parts of what they say are aerial bombs used to fire phosphorus, an explosive that produces a longer lasting flame that sticks to its target.

These are tactics that are bearing fruit in Donbass, which has seen some of the fiercest fighting since the war began in February, and where Putin has concentrated his military might since failing to take the Ukrainian capital Kyiv. .

Nashik: Exercise TOPCHI – the annual firepower demonstration and training exercise of the Artillery Regiment – was conducted by the School of Artillery (Devlali) at the Devlali firing ranges on 14 January. The event was attended by senior defense and civilian officers, officers from the Defense Services Staff College, and all ranks from all three […]

Roman Petrenko – Friday, June 10, 2022, 11:32 a.m. Mykolaiv Mayor Olexander Senkevych reported that the Russian self-propelled Pion [Peony] the artillery is able to fire on the Korabelniy and Ingulsky quarters of the city at any time as they are within the distance of the city covered by the artillery. Source: Senkevych in an […]