By Jimmy McCloskey for Dailymail.Com

A Ukrainian town southwest of Kiev was rocked by two huge explosions shortly after midnight local time on Sunday, filling the sky with an eerie orange glow, as Vladimir Putin was reported to be outraged at the lack of progress of his troops.

Local journal The Kyiv Independent wrote that an oil depot had exploded in Vasylkiv, a town about 40 kilometers southwest of Kiev.

Ukrainian television channel Next shared footage of flames and dark clouds rising into the sky at the site of the attack as fuel burned.

Those explosions – believed to have been triggered by Russian ballistic missiles – filled the skies over Kiev with an eerie orange glow in the early hours of Sunday morning. It is not known if anyone was injured or killed in the explosions.

Vasylkiv Mayor Natalia Balasynovych told the Independent that her town and airfield had come under heavy bombardment from ballistic missiles. She said, “The enemy wants to destroy everything around, but he won’t be able to. Wait!’

Vasylkiv had come under heavy Russian bombardment in the early hours of Saturday as Russian troops battled to take control of a key strategic post on the road to Kiev.

The blasts, first reported by CNN, occurred near the Ukrainian capital’s secondary airport, Boryspil International. They took place about 15 minutes apart and set off car alarms miles from the epicenter of the blast.

Kiev’s 2.9 million citizens face another night of terror as it was claimed Russia would step up its bombardment on Saturday night and target commercial businesses in a bid to destroy Ukrainian morale.

Many fled to underground shelters in a bid to stay safe, although other men and women took to the streets with weapons in a bid to repel any Russian advance.

BNO News also shared footage of heavy shelling in Kharkiv, eastern Ukraine, with the night sky lit up with the orange glow of the explosions. 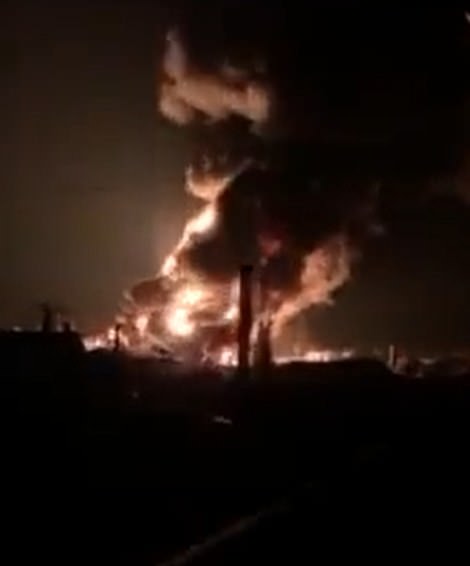 An oil depot is pictured on fire in the Ukrainian town of Vasylkiv, southwest of Kiev, in the early hours of Sunday. The city’s mayor, Natalia Balasynovych, said the fire was the result of a Russian ballistic missile attack. 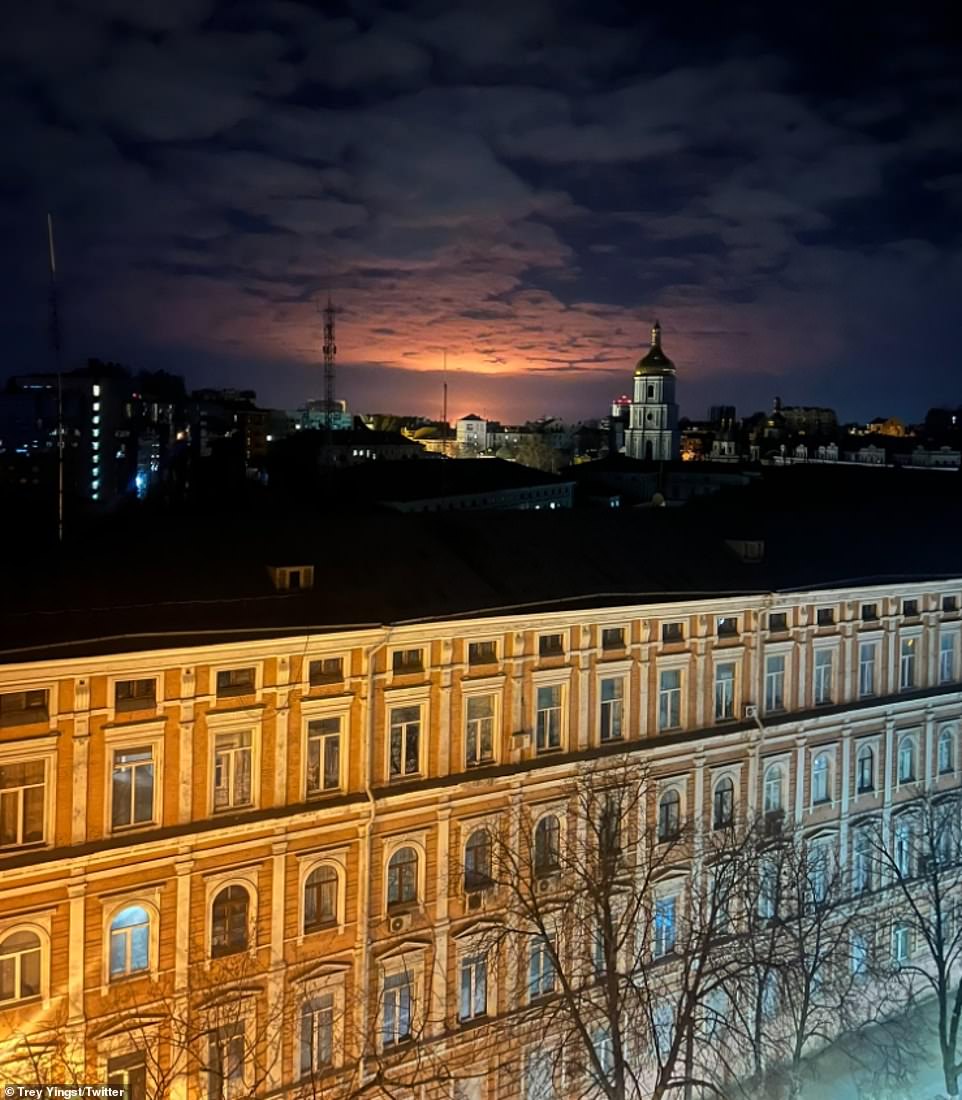 A strange orange glow lights up the sky over Ukraine in the early hours of local time on Sunday, with the fire believed to be at the site of a fuel depot near one of the airports in the town 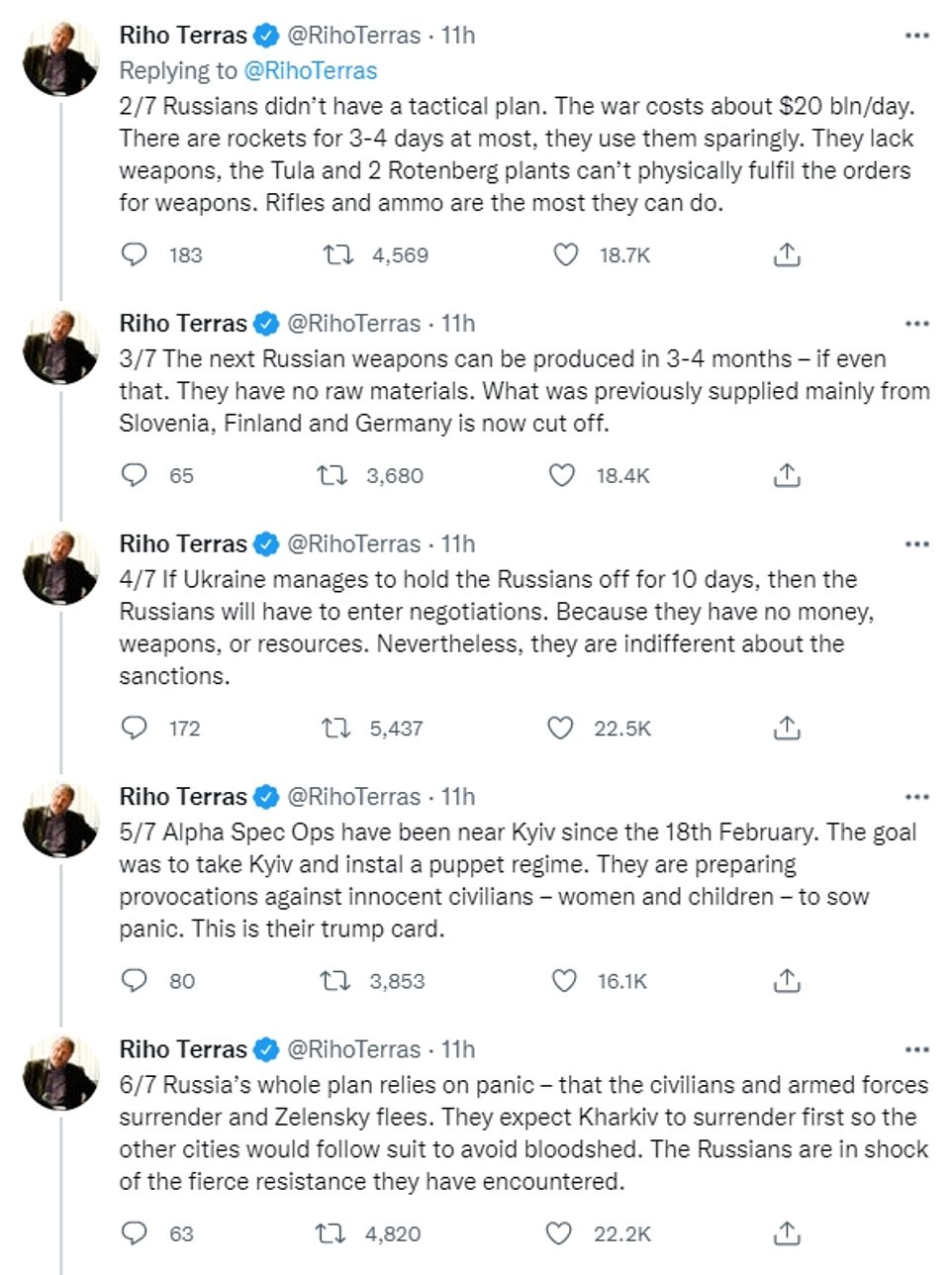 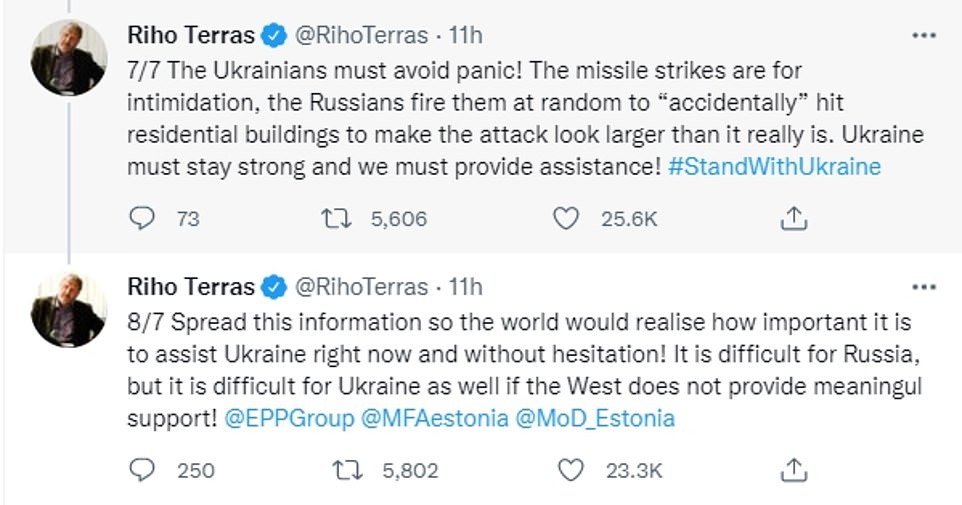 Terras also claimed horrific attacks on civilian targets would be launched in an attempt to panic Ukrainians, but urged them to stand firm. 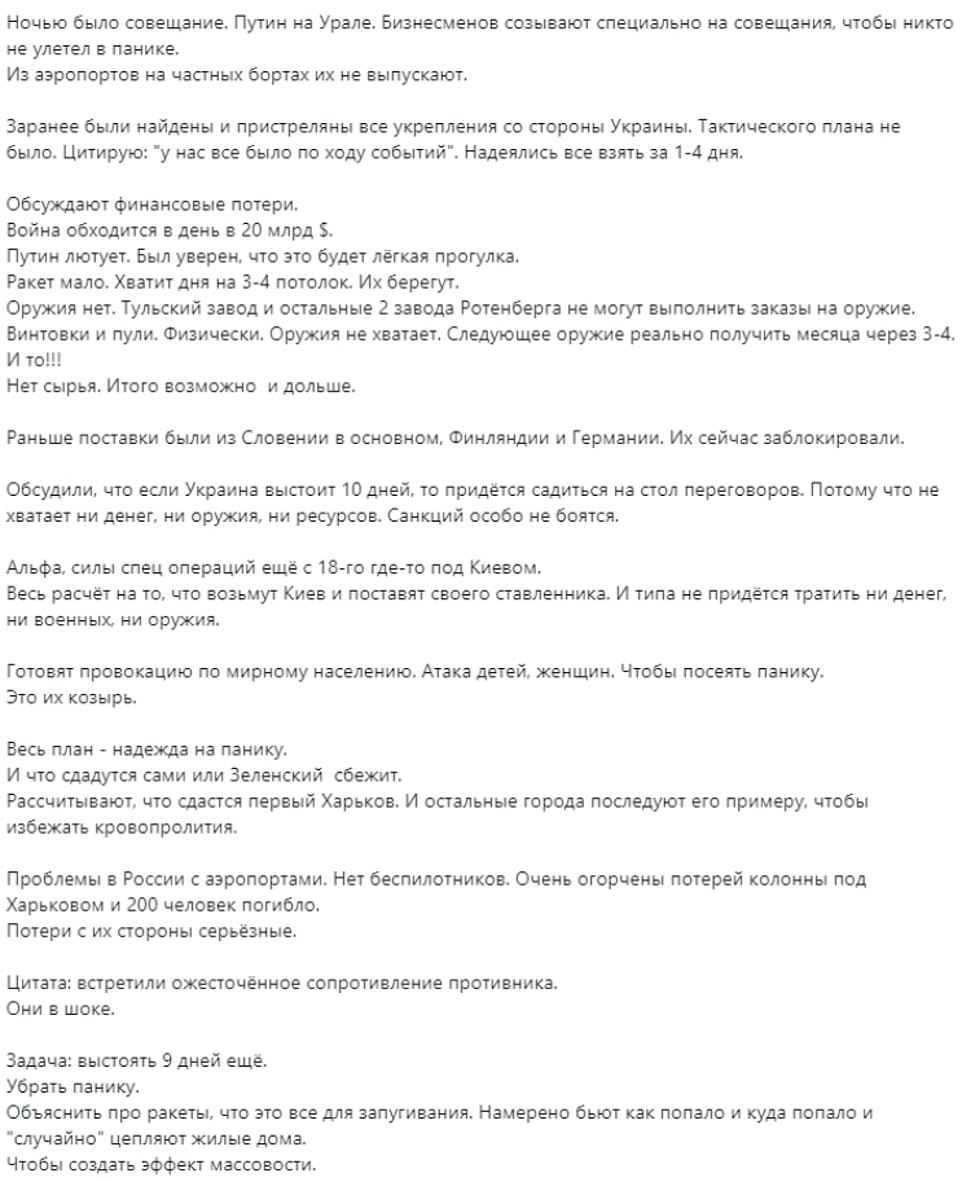 Terras shared this photo which he claims is from a Russian intelligence briefing, and which says Putin’s invasion is going much worse than the Kremlin chief had expected. 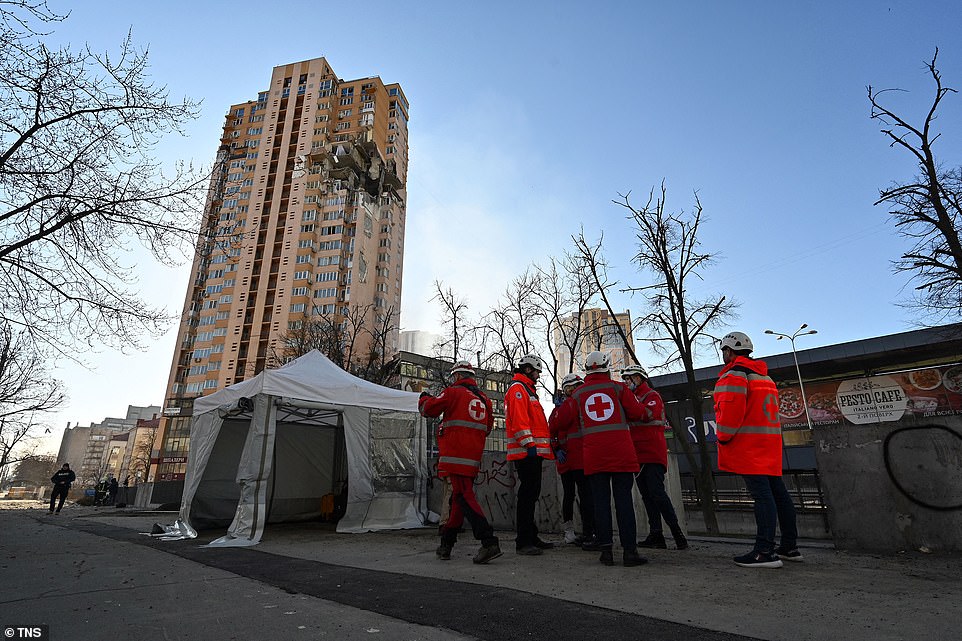 A Russian missile hit a residential tower in the early hours of Saturday, with local officials warning that Putin would step up attacks on civilian targets in a bid to terrify Ukrainians into submission.

It is estimated that around 200 Ukrainian civilians have been killed so far. Meanwhile, Ukraine has claimed to have killed 3,500 Russian soldiers, hundreds of whom are believed to have died when two transport planes were shot down on Friday evening.

These losses and the continued failure to capture Kiev infuriated Vladimir Putin, according to former Estonian defense chief Riho Terras.

Terras wrote on Twitter: “Putin is furious, he thought the whole war would be easy and everything would be done in 1-4 days.

“The Russians are in shock at the fierce resistance they encountered.” 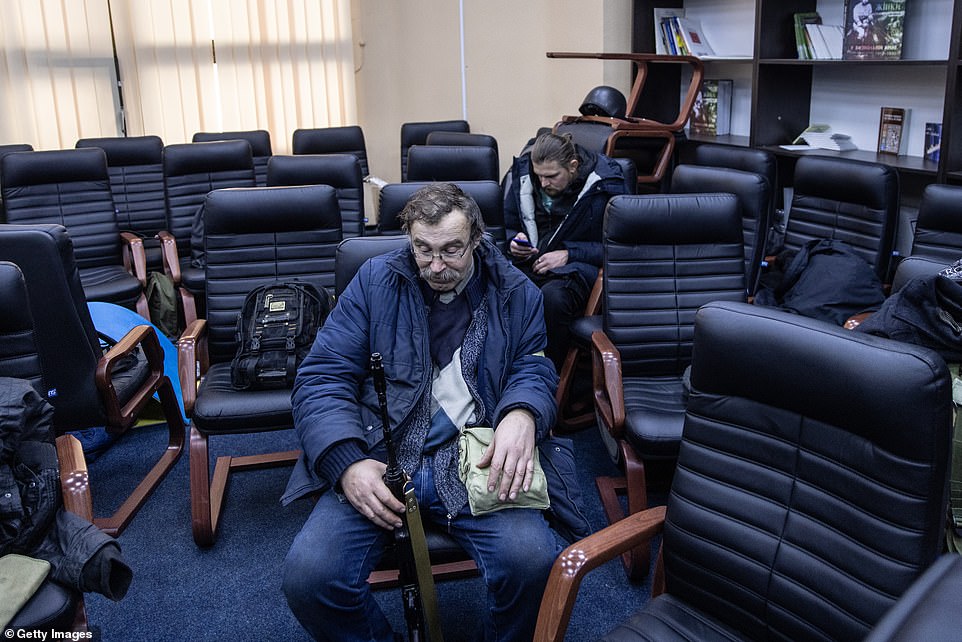 A Ukrainian man waits with his weapon on Saturday at a territorial defense registration unit. Tens of thousands of ordinary Ukrainians have signed up to try to help their army defeat Vladimir Putin’s invasion

The defense expert went on to say that Russia was failing because it failed to adopt a ‘tactical plan’ and beyond hope that the attack would ‘sow panic among civilians and armed forces and force (Ukrainian President Volodymyr) Zelensky to flee”.

Terras shared an image of a piece of paper thought to be a defense document that proclaimed: “Putin is raging.” He was sure it would be a cake walk.

Story development, check back for updates

According to a Tweet posted by the Lithuanian Ministry of Defense (MoD) on April 6, 2022, the Lithuanian Armed Forces are now equipped with 18 German-made aircraft PzH 2000 155 tracked self-propelled howitzers and now has a fully operational artillery battalion.Follow Army Recognition on Google News at this link The Lithuanian army is now equipped […]

BRATISLAVA, ($1 = 0.92 euros) — Slovakia and Ukraine are negotiating the purchase of a 155 mm Suzana 2 self-propelled howitzer from kyiv. The initiative comes from Bratislava, which offers kyiv the “last heavy weapon” produced by the Slovak defense industry. The talks were confirmed by Slovak Defense Minister Jaroslav Nad. Photo credit: Wikipedia The […]

The Organization for Security and Co-operation in Europe (OSCE) Special Monitoring Mission notes that the militants deployed 76 tanks, 10 howitzers and 18 artillery mounts outside assigned weapons storage areas in the temporarily occupied territory of Donetsk and Luhansk regions. This follows from an OSCE report published on the organization’s official website, reports the Ukrainian […]