ELMAU, Germany – US President Joe Biden is set to announce that the United States is providing an advanced surface-to-air missile system to Ukraine, along with additional artillery support, according to a person familiar with the dossier, in the latest assistance intended to help the country defend itself against Russia’s four-month invasion.

The United States is buying NASAMS, an anti-aircraft system developed by Norway, to provide medium and long range defense, according to the person who spoke on condition of anonymity. NASAMS is the same system used by the United States to protect sensitive airspace around the White House and the US Capitol in Washington.

The additional aid includes more ammunition for Ukrainian artillery, as well as counter-battery radars, to support its efforts against the Russian assault in Donbass, the person said.

The announcement comes as Biden huddles with allies this week in support of Ukraine in meetings at the Group of Seven (G7) advanced economies summit in Germany and the annual NATO leaders’ meeting in Madrid.

In his daily address on Sunday evening, Ukrainian President Volodymyr Zelensky renewed his calls for more weapons and air defense systems to be delivered to Ukraine and for new sanctions against Russia by G7 countries, after a barrage of Russian missiles hit targets across Ukraine earlier today. .

“We need a powerful air defense – modern, fully effective. Which can provide full protection against these missiles. We talk about it every day with our partners. There are already agreements. And partners need to act faster if they are really partners, not observers,” he said.

“Delays in transferring weapons to our state, any restrictions are in fact an invitation for Russia to strike again and again.”

The leaders of the G7 economic powers are set to make long-term commitments to support Ukraine as they meet in the German Alps and speak again via video link with Zelensky.

They will begin Monday’s session of their three-day summit with a focus on Ukraine. Later, they will be joined by leaders from five democratic emerging economies – India, Indonesia, South Africa, Senegal and Argentina – for a discussion on climate change, energy and other questions.

The war in Ukraine was already high on the minds of G7 leaders as they opened their summit at the secluded luxury Schloss Elmau hotel on Sunday, just as Russian missiles hit Ukraine’s capital of Kyiv for the first time. times for weeks.

Biden said Russian President Vladimir Putin “expected, from the start, that NATO and the G7 would split up somehow, but we didn’t and we’re not going to.” TO DO”. Britain’s Boris Johnson has warned leaders not to give in to “fatigue”.

On Monday, they have the opportunity to demonstrate this unity to Zelensky and reaffirm their commitment to support Kyiv financially and otherwise.

Biden hopes to use his trip to Europe to proclaim the unity of the coalition that is pressing to punish Russia for its invasion of Ukraine as much as he is urging his allies to do even more – seeking to counter doubts about his staying power so that the war is in its fifth month.

The summit’s host, German Chancellor Olaf Scholz, said last week he wanted to discuss the outlines of a “Marshall Plan for Ukraine” with his G7 counterparts, referring to the state-sponsored plan. States that helped revive European economies after World War II.

With the war still going on and the destruction piling up day by day, it’s unlikely to be a detailed plan at this point. Scholz said that “the reconstruction of Ukraine will be a task for generations”.

A senior US administration official, speaking on condition of anonymity to discuss private conversations between G7 leaders, said the US and Europe were aligned in their goals of a negotiated end to the conflict, even if their roles sometimes seem different.

Scholz and French President Emmanuel Macron tried to facilitate this through active conversations with Russian President Vladimir Putin and Zelensky, while supplying arms to Ukraine. The United States has largely halted important talks with Russia and aims to build Ukraine’s battlefield capability as much as possible so that its eventual position at the negotiating table is stronger.

The endurance of tough sanctions on Russia could ultimately come down to whether the G7 and other leaders can identify ways to ease energy supply problems and soaring prices once winter arrives. , as they seek to divest from Russian sources of fuel. 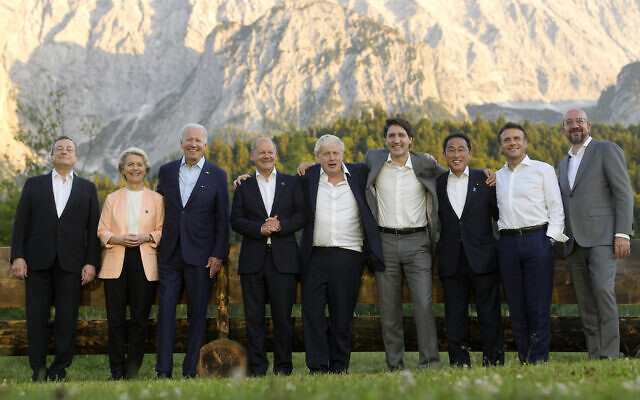 Group of Seven leaders pose during a group photo at the G7 summit at Elmau Castle in Kruen, near Garmisch-Partenkirchen, Germany, June 26, 2022. (Markus Schreiber/AP)

The G7 meeting is sandwiched between a European Union summit last week that agreed to give Ukraine candidate status – kicking off a process that is expected to take years and whose success is not guaranteed – and a summit of NATO leaders starting Tuesday in Madrid.

The G7 leaders – the United States, Germany, France, the United Kingdom, Italy, Canada and Japan – can hope to make progress by bringing their counterparts from their five guest countries closer to Western views on sanctions against Russia.

Scholz is also eager to win over these countries for his idea of ​​a “climate club” for nations that want to move forward when it comes to tackling the problem.

You are a dedicated reader

We’re really glad you read X Articles from The Times of Israel over the past month.

That’s why we started The Times of Israel ten years ago – to provide discerning readers like you with must-read coverage of Israel and the Jewish world.

So now we have a request. Unlike other media, we don’t have a paywall in place. But since the journalism we do is expensive, we invite readers to whom The Times of Israel has become important to support our work by joining The Times of Israel community.

For just $6 a month, you can help support our quality journalism while benefiting from The Times of Israel WITHOUT ADVERTISINGas well as access Exclusive Content only available to members of the Times of Israel community.

Thanks,
David Horovitz, founding editor of The Times of Israel

Already a member? Log in to stop seeing this

Video released Thursday by the Ukrainian military shows artillery strikes on what officials said was a line of Russian military vehicles not far from Kiev. The aerial footage appears to have been recorded remotely by a drone. It shows at least eight strikes on vehicles on a rural road identified by Ukraine’s Defense Ministry as […]

Ukraine has a lot of artillery. But it lacks ammunition.

Ukrainian army rocket artillery fire in 2015. Photo by Ukrainian Ministry of Defense Russia and Ukraine might be bitter enemies, but due to their shared heritage, the two countries adhere to much the same doctrine for ground warfare. One principle they share is the use of artillery. Armour, reconnaissance and electronic warfare units isolate an […]

The mother and sister of a man who was killed by a bomb blast in Yangon on Tuesday were held for questioning the following day, according to a neighbor of the family. “They were taken away briefly for questioning, but they returned around 10 p.m. that night,” said a resident of the same neighborhood in […]